He might have thought they knew. Evelyn always reads your letters and mostly enjoys them very much except your last two letters to me and one letter directly to her which seemed to be in answer to some letter I guess she must have written to you. You know her.

Now,, why were these three letters unenjoyable to her? Because, like Moses and Jesus and most pirs and Rumi and others, once in a while you forget God are yourself. And I was the reason this last time. It was simply that as titular head he was chosen and anointed by his father not as channel to us others. He is great by never claiming such channelship. Simply in the humble manner of organiser.

In the same vein, Ali Khan and later rather innocently Musharaff Khan, usurped this position. This does not mean that you may not be further advanced, at least in certain respects, but nobody in the whole world is going to know that except God and all wise men will leave this knowledge to God and not speak it, but to whoever it be revealed, it is revealed and that is more than sufficient.

The other thing that irked you was that, in order to counter your demand that any one being taught by you must have the traditional sufi attitude of a pupil to a master a la fanafisheik or at least fanafi rassoul, I had to humbly no really I am not humble at all, see later tell you it was really physiologically impossible for me as for so many others to take any other stand than Fana-fi-Alla or Fana-fi Lillah, which is not all sufi lore to the contrary notwithstanding a gradual and natural development entitling you to titles, but simply a matter of temperament.

And one of the things I always say is that the scientist type, who can never adopt a fana-fi sheik or even a fanafi-rassoul attitude is not therefore excluded from Sufism or any other line of training, and the Fana-fi-Allah or Fana fi-Lillah stage is not at all a sign of Pir-o-Murshidship as you say, though of course a Pir-O-Murshid also is on that stage, but for a Murshid his teaching urge in the special sufi lore is the first condition, then a lot more…. Every person really is, and Hal and Makam are terms that, as you know changes not merely with different sufi schools, but for the same person as he grows or diminishes, and they are unsuitable for public use.

But for me sufism is not so central as for you. You are a great specialist. 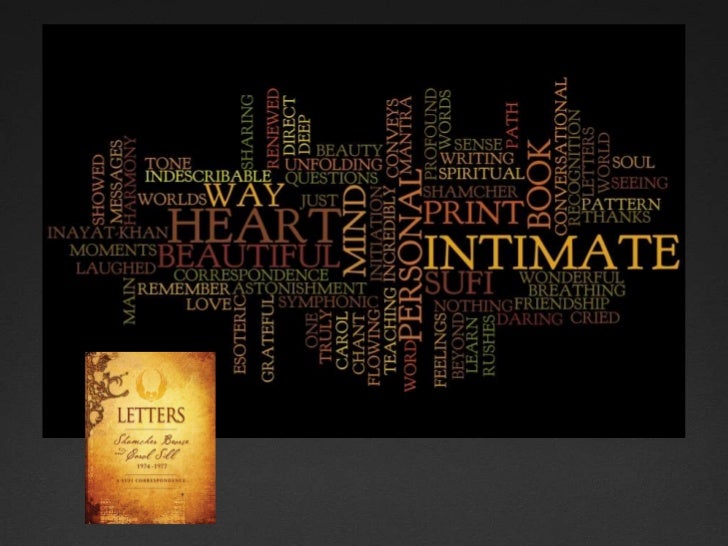 I am an absolutely nothing, disappearing behind the mask of God, know nothing nothing at all, and as such have a great demand on me that should not be disturbed. I have no respect whatever for the world etc. I was with Temple of Understanding for so many years. Vilayat and I are both ashamed of not having achieved what it has. Maheboob Khan was indirectly appointed by Hazrat Inayat to rein sic for Vilayat until Vilayat would be of age. Nobody accepted Rabia Martin.

Abu Bakr Cheleby, 21st descendant from RUMI and head of the Mevlevis, whirling dervishes, is head and organiser but certainly not the most enlightened man of his order. Vilayat is far more than that for his order, but not, either, necessarily the most enlightened. The great thing with Vilayat is that he does not claim to be, in fact claims nothing.

Very late in my life, in 48 when I was 52 years old… I had chosen engineering before I knew Inayat Khan. So one time I when I was the managing director of a small company, and I was in Paris I saw in the National Science Foundation of France a story about energy from the ocean. There were tides, waves, but especially the temperature difference between surface water and deep water.

You put in a steam engine there.

The warm water of the surface near the tropics evaporates, boils in a boiler, when you lower the pressure, when you pump air out. That steam that develops from this boiling runs a turbine, the turbine runs a generator. And after the turbine, the steam is condensed and this steam apart from being condensed is then fresh water. So you do two things with this machine: you produce energy and water.

In California we had a great water shortage at that time. We still have but we have forgotten that, now we have a power shortage.


Moderation of Questionable Content Thank you for your interest in helping us moderate questionable content on Lulu. How does this content violate the Lulu Membership Agreement?


From our Membership Agreement "Lulu is a place where people of all ages, backgrounds, experience, and professions can publish, sell, or buy creative content such as novels, memoirs, poetry, cookbooks, technical manuals, articles, photography books, children's books, calendars, and a host of other content that defies easy categorization.

Location of Infringing Material Identify each web page that allegedly contains infringing material. Sworn Statements I have a good faith belief that use of the copyrighted materials described above as allegedly infringing is not authorized by the copyright owner, its agent, or the law. I wish to be contacted with the results of the investigation. Your notification has been sent Lulu Staff has been notified of a possible violation of the terms of our Membership Agreement. We were unable to complete your request.

Human Ecology: Notes on Age Verification The page you are attempting to access contains content that is not intended for underage readers. Please verify your birth date to continue. According to the author, Islam is in a state of collapse. It is a system that was never a viable, but because of it's rigid tribalistic structure, it has managed to endure.

The author presents the argument that Islam is falling Koran is written in Arabic, a programmer makes 'Lafzi' Apps to find Koran words in Indonesian language; of course, it never be matching. This Apps is broken since computer programmer never learned about the Koran sciences.

This volume is based on the papers delivered at a conference on 'Religious Movements and Transformations in Judaism, Christianity and Islam', held in Jerusalem on January , on the occasion of celebrating the fiftieth Drawing on in-depth ethnographic fieldwork in Amman, Sarah A. Tobin demonstrates that Muslims combine their interests in exerting a visible Islam with the opportunities and challenges of advanced capitalism in an urban setting,